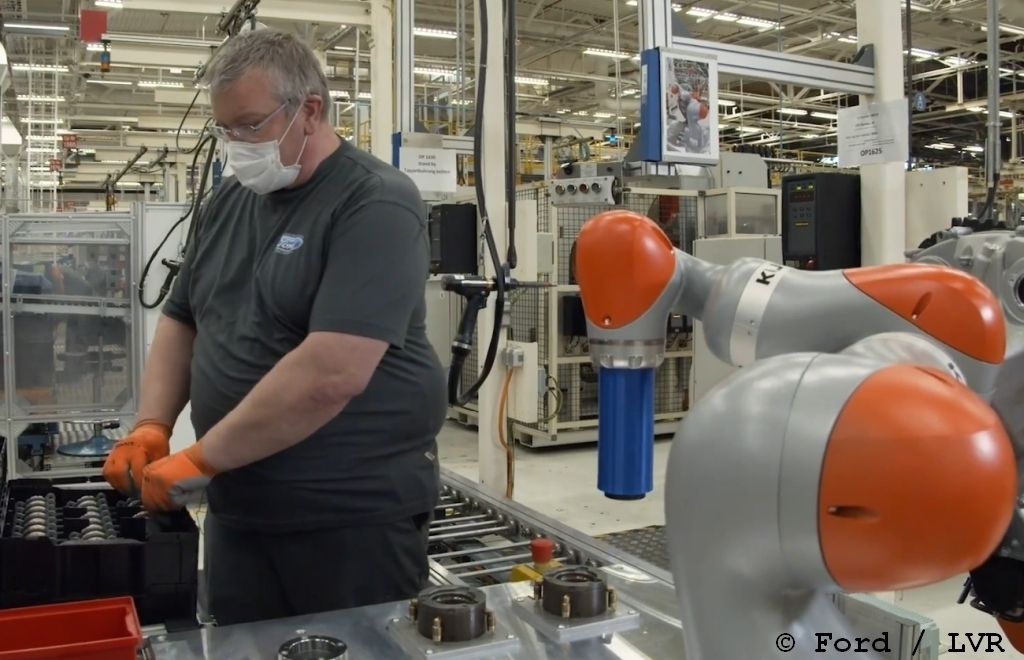 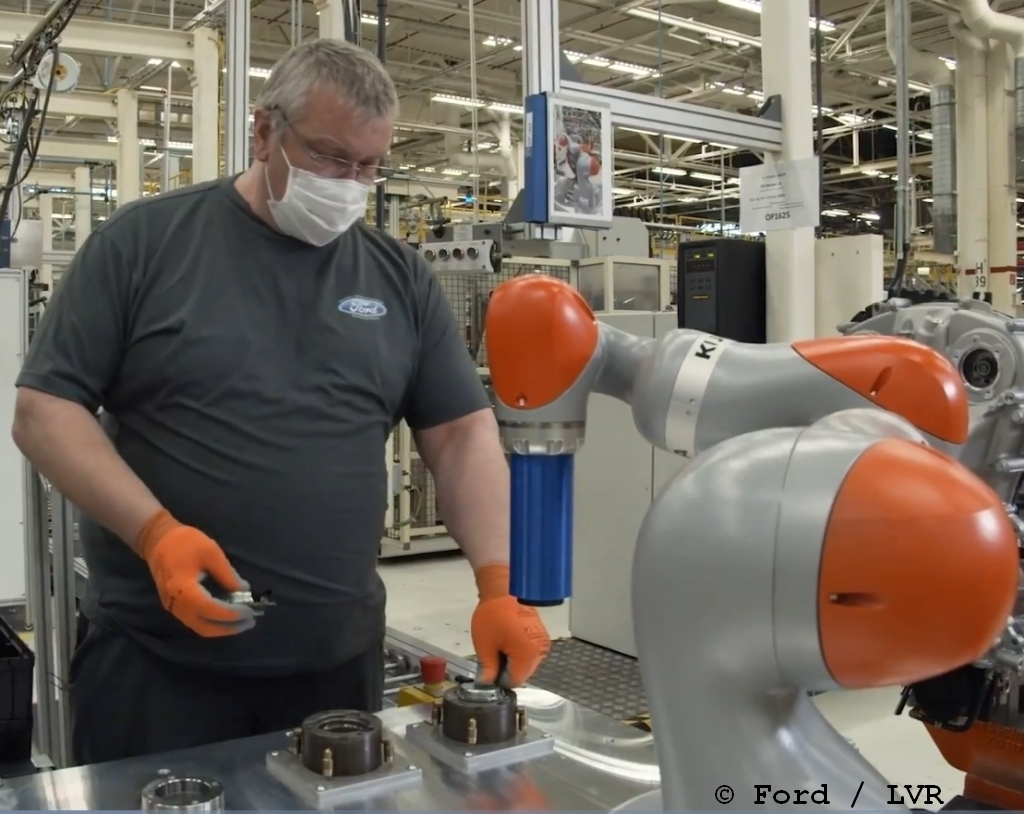 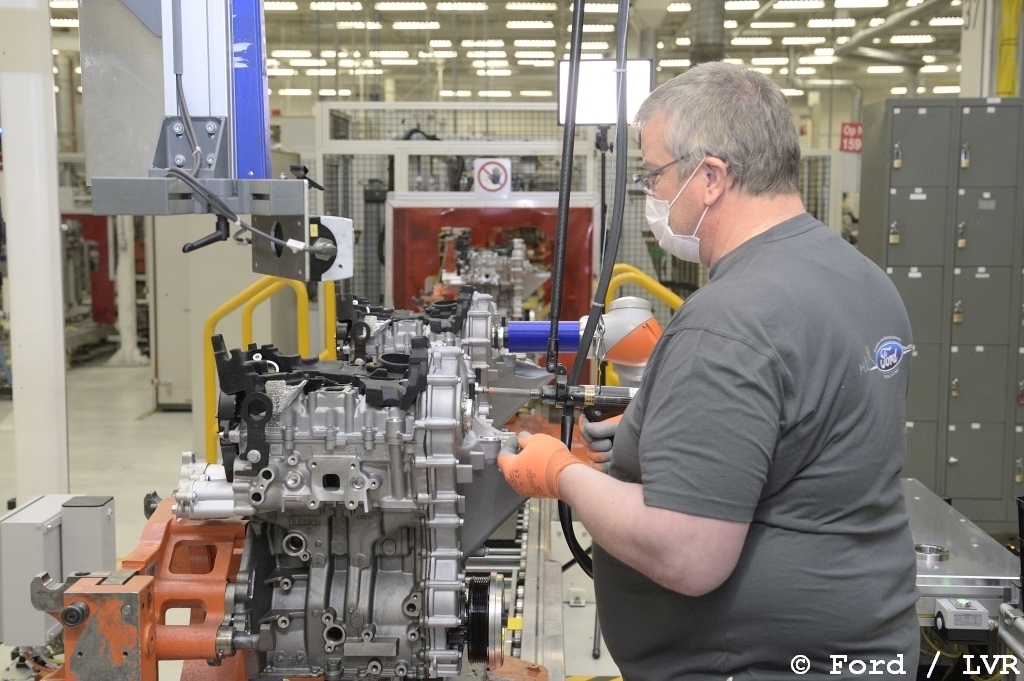 In Germany, Ford-Werke has its headquarters in Cologne. The European headquarters of the company is also located in Cologne, where, in addition to the head office, the vehicle production for the Ford Fiesta, the development center, the production of engines and transmissions, for example, and the European spare parts warehouse are also located. Ford-Werke employs over 15,000 people from more than 90 nations in Cologne and over 20,000 in Germany. In Europe, Ford employs about 42,000 people, including joint ventures and independent subsidiaries 55,000. The company manufactures passenger cars, commercial vehicles, engines and transmissions in many production facilities in Europe - some of them with joint ventures.
As part of the Kobot project, workplaces for employees with severe disabilities in the area of engine production or assembly were tested in conjunction with a collapsing robot, scientifically monitored and later integrated into the assembly line.

Statement of the managing director of manufacturing on the work design:

"I am proud that we were able to redesign a workplace with this showcase project in such a way that we have another offer for employees with performance-related disabilities. There has been a great deal of acceptance among the workforce, and the employees assigned to this workplace are especially excited about the new job."

Disability and impairment of employees:

The employees have impairments of the musculoskeletal system in the shoulder and hand area, which lead to limitations in certain physical activities - such as assembly - where certain working postures have to be adopted and strengths have to be applied to perform them. Due to the intensity, frequency and repetitive nature of the work, the two employees with shoulder and hand impairments in particular are subjected to increased stress on one side. The use of such workplaces therefore requires an appropriate design suitable for disabled people.

The workplace is located in the cycle-based line for the assembly of motors in rotating shifts. The motors arrive at the workplace on carriers via the assembly line. There, VCT solenoid coils are then inserted into the openings in the front cover of the engine block. To do this, workers remove the VCT solenoid coils from a storage box (Fig. 2) and place them positioned in an oiling device (Fig. 3). The robot now removes the solenoid coils from the fixtures and presses them firmly into the openings on the engine. Finally, the workers screw the VCT solenoid coils to the motor block using a pneumatic screwdriver (Fig. 4), which is suspended from a so-called floating balancer for tools to compensate for the weight. The necessary torque on the screwdriver is absorbed by a torque support, so that no strain is exerted on the wrist. In the past, the solenoid coils were pressed in by hand. The high press-in force required for this and the frequency of the process resulted in increased strain on the musculoskeletal system in the shoulder-arm or shoulder-hand area. For this reason, employees with impairments in this area in particular could not be used here in the past. For this reason, and in order to expand the range of applications for employees with corresponding impairments, work is now being carried out at this workplace in cooperation with the robot.
The robot is a representative of a new generation of state-of-the-art industrial robots that are no longer used to automate processes, but above all to support employees. In this context, the robot supports the employees in what was formerly an ergonomically suboptimal and stressful activity and works "hand in hand" with them without a safety guard.

As part of the Kobot project, Ford, the Institute for Transmission Technology, Machine Dynamics and Robotics (IGMR) of the Rheinisch-Westfälische Technische Hochschule (RWTH) Aachen and the Landschaftsverband Rheinland (LVR) attempted to preserve or create workplaces in engine assembly for people with severe disabilities. After successful completion of the project, the workplace was thus permanently integrated into the engine assembly line for two employees with severe disabilities. The project, and thus the workplace designed to be suitable for disabled people, was funded by the Inclusion Office responsible for the site.
also the contact details for the